“The phenomenal growth and progress of Armor Milling Corporation is a story of love, dedication, and sacrifice of people who gave a substantial part of the best years of their lives for the cause of providing the best quality feeds for the entire locality…” 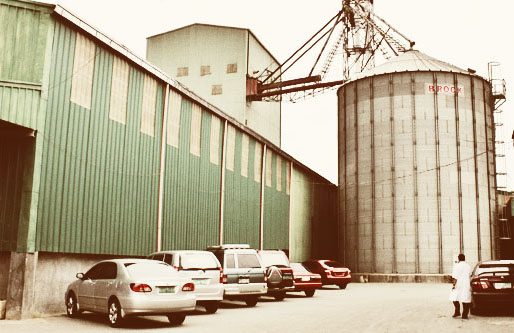 A fulfilment of a life-long dream of a well-known businessman in Lipa City, Mr. Rufino M. Mojares, Armor Milling Corporation (Armor Feeds) was successfully founded on the last quarter of 1992.

It was from his own experience that Mr. Mojares knew the craving of Batangueños aspiring for high quality feeds. With the vision of providing premium quality feeds to the farmers at the lowest possible cost, he conceptualized the founding of a feed

milling corporation which was officially started on March 8, 1993 with the proposition the the best quality feeds available for Batangueños and establish a quality name in the feed milling industry.

The name ARMOR was derived from the shields used by knights to protect themselves in wars during ancient times. Consequently, a slogan anchored on the said name was shaped, “SA ARMOR, PROTEKTADO ANG KITA MO”. The logo consists of intricately designed armor with animals being fed by the products the company manufactured in each corner – poultry, hog, cattle, and fish. Reinforcing the logo in the corporate letterhead is a slogan which goes, “Armor Feeds, the High Performance Premium Feeds”.

After a year of existence, Armor Milling Corporation has successfully opened its six pioneer branches which were located in Lipa City, Taysan, and San Jose, Batangas. Other branches outside the province were in Lucena City, Bicol, and Pangasinan.

Armor Milling Corporation was among the first feedmills to introduce the different lines of mash feeds that catered to the different needs of the market be it high end or low end. Aside from the existing poultry and swine mash of different lines, Armor also introduced fighting cock concentrates (FCC) in 1995. The brand “HARIMANOK” became a word of mouth among the cock fighting aficionados.

At the start, the company leased a one-hectare lot in Antipolo del Sur, Lipa City. The building and the equipment had already a capacity of 700 bags per day of mash feeds but reaching the maximum capacity during those times was not that easy considering that competition among local feed millers were so strong and the prices of raw materials were turning up and down and especially during the 1997 economic crisis.

With a strong desire to improve the quality of feeds that Armor is selling in the market, the Board of Directors of Armor, lead by Mr. Mojares, took another leap as they purchased and operated a pelleting machine in 1996 not bothered by the crisis that was going on with the belief that pelleting technology could help the Filipino farmers improve their farm efficiency.

It was also during these times that Armor Swine Pellets and Crumbles Feeds were developed and introduced in the market. It proved otherwise that there were still untapped markets and uncaptured customers waiting to be served accordingly. Because very few local feedmillers have pelleting facilities during those time Armor accepted toll milling arrangements with the feedmillers of Southern Luzon.

The birth of Armor Aqua Feeds also happened during these times. The research and development and improvement of Armor tilapia and bangus feeds were given utmost attention with focus on machine, technology, formulations and quality assurance. Several trials were conducted in different places like Palacpacin Lake in San Pablo, Taal Lake in Batangas, and Pangasinan. The efforts of the people behind the creation of Armor Aqua Feeds were rewarded as these feed lines become the bread and butter of Armor Milling Corporation nowadays.

Another big leap was achieved when Armor Milling Corporation entered into a long term tolling agreement with the nation’s feed milling giant, Bmeg, in the year 2000 wherein technologies were introduced and efficiencies were improved. With Bmeg’s excellent standards, the partnership opened an opportunity for employment creation and other business opportunities which contributed to the progress of the company.

On its 10th year anniversary, a grand opening and a blessing ceremony of the new commercial plant (Plant 2) highlighted the event. Antipolo Plant machineries were transferred to San Felipe signaling the complete production of Armor Feeds at San Felipe Plant 1 and 2 leaving the Antipolo Plant thus changing the business address of Armor Milling Corporation from Antipolo, Lipa City to San Felipe, Padre Garcia. This is a dream come true for all the people of Armor from renting a plant to owning it with pride.

Aside from the physical and visible aspect of Armor Milling Corporation, the growth of this company can be perceived not only in its modern structures and facilities but also in terms of its contribution to the society of providing jobs to many.

The phenomenal growth and progress of Armor Milling Corporation is a story of love, dedication and sacrifice of people who gave a substantial part of the best years of their lives for the cause of providing the best quality feeds for the entire locality.

On its 15th year anniversary, it can be proudly said that Armor Milling Corporation is a symbol of success as 15 years have gone by since one man’s vision and dream was put into reality. Today, his legacy of excellence lives on.

We the Management and Staff of Armor Milling Corporation undertake our mission to provide our customer with superior quality products through continual improvement of our systems, maximum quality monitoring and control, maximum production efficiency and efficient use of man power resources. With these commitments, we shall exert our fullest effort to attain a desirable working relationship among the various components of the organization, a safe and healthy work environment and a dynamic working relationship between ARMOR and our PARTNER.

We the Management and Staff of Armor Milling Corporation, have a strong commitment to quality and it is our vision to be recognized as Top Advocate and Procedure of Superior Quality Feed Product.

We shall commit ourselves to continuously provide total quality service to elicit customer delight and satisfaction.

We, the Management and Staff of Armor Milling Corporation, in totally committing ourselves to our vision and fully accepting our mission vow to work for the organization and the customers through our actions by exhibiting the following core values:

We will never compromise our integrity and we always do what is correct both morally and ethically.

We commit ourselves to continuously provide our customer’s needs.

We will always work to our fullest ability.